To learn more about oral desease prevention, click play and watch the video below...

Dental caries or cavities more commonly known as  ‘tooth decay’ are caused by a breakdown of the tooth enamel. This breakdown is the result of bacteria on teeth that breakdown foods and produce acid that destroys tooth enamel and results in tooth decay. Essentially we need a tooth, bacteria and sugar for bacteria to eat. Take away one of these and there are no caries.

We used to take teeth out 100 year ago! We now give oral health messages like clean teeth to remove bacteria or reduce sugar to remove food source for bacteria.

With sugar its about the frequency, not just the amount. Timing is everything….

Imagine two brothers, Benjamin and William, both eat 100 sweets each in a day. Benjamin is greedy and eats all his sweets between 09:00 and 09:20, 20 minutes all the sweets are gone. By 10:00 all the sugar is washed out of his mouth by his saliva. William isn’t greedy he pops a sugary sweet in his mouth every five minutes; his mouth is bathed in sugar the whole day. Same number of sweets, but William will end up with the holes in his teeth. This applies to all sugary snacks in between meals, the soft drinks we slowly sip rather than gulp down for example. 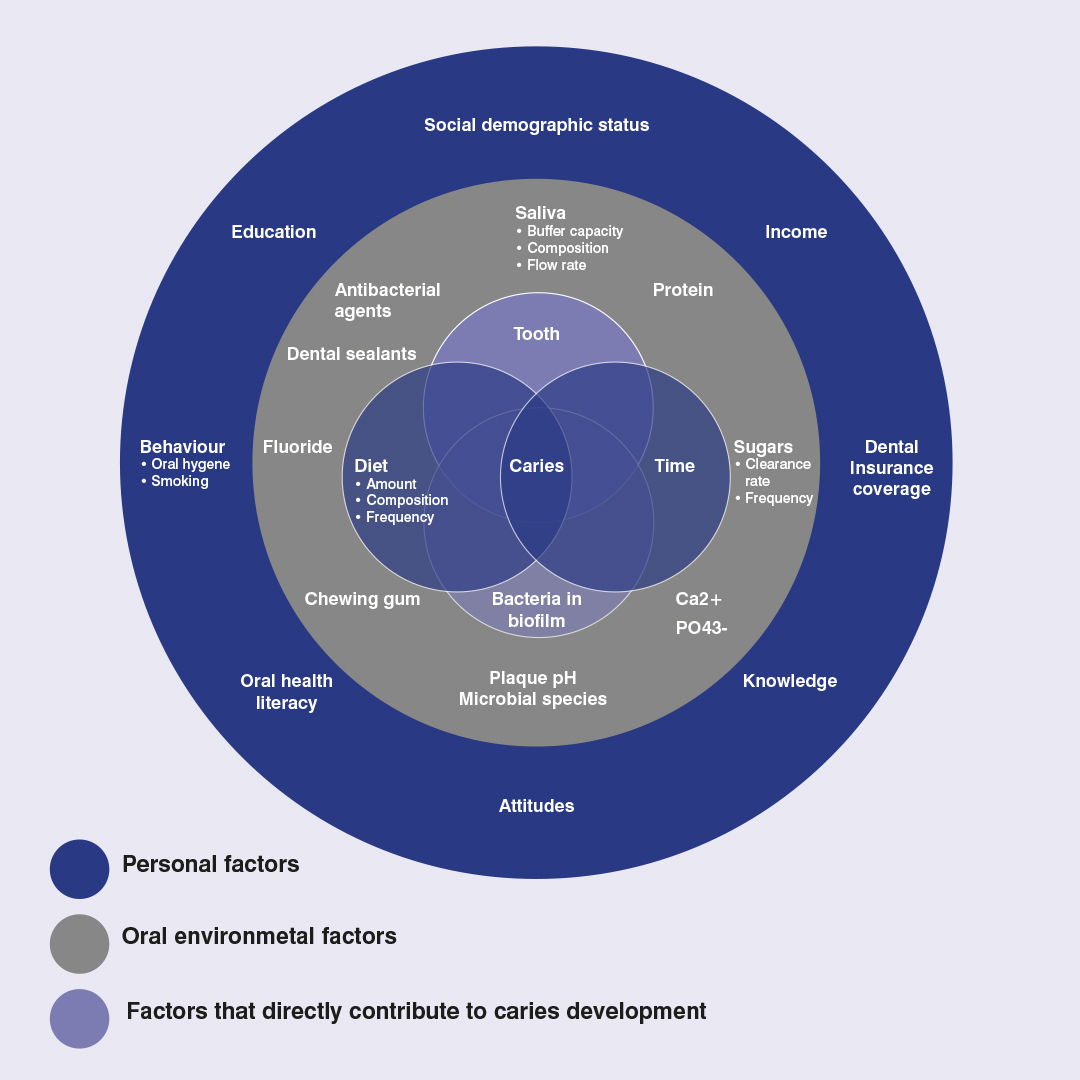 The development of caries

The development of caries is dependent on the interaction of four primary factors. These are a host (tooth surface), a substrate (food), the presence of oral bacteria, and time. Caries will not develop if any of these four primary factors are not present.

Each of the four primary factors can be further divided into sub-factors that also influence the likelihood of caries see diagram here.

The sub-factors that influence caries development are age (the enamel of the deciduous teeth of children is more susceptible to acid demineralization), if fluoride has been used, tooth morphology (which varies within the mouth and from person to person), root surface exposure due to gum recession, nutrition (if tooth-strengthening nutrients are consumed), and saliva flow rate and buffering capacity.

A tooth is more susceptible to caries if it has less acid resistant enamel due to age or low fluoride intake, or if the roots have been exposed by gum recession. Caries risk is also higher if the diet is low in nutrients (such as magnesium and vitamin D) that are necessary for healthy tooth development, and/or when an individual’s saliva flow rate is low or has a low buffering capacity. Pit-and-fissure demineralization is more likely to develop in teeth with numerous and exaggerated grooves. Teeth are less prone to caries activity in situations where tooth enamel has been strengthened by fluoride, a diet of tooth-strengthening nutrients is consumed, and/or the buffering capacity of saliva is high.

The sub-factors that influence caries development are oral clearance (if food is retained or not in the mouth after eating), oral hygiene (if, after eating, food is actively removed with a sharp instrument such as a toothpick), eating frequency, food detergency (if consumed food can clean teeth), consumption of carbohydrates, and the cariogenicity of consumed carbohydrates (sucrose is more cariogenic than glucose and fructose).

When food is retained in the mouth and not actively removed after eating, is consumed more frequently, and/or more sugars, sucrose-containing foods, and sticky foods (like toffee) are consumed, there is higher risk of caries. On the other hand, when remaining food particles are actively removed after eating, food is consumed less frequently, fewer sugars, sucrose-containing foods, and sticky foods are consumed, and/or more tooth-cleaning foods (like apples) are eaten, the likelihood of caries is lower.

The development of caries depends on microbial load (how much bacteria is present), plaque composition (with some types of plaque microbes being more cariogenic than others), plaque acidogenicity (how much acid can be produced by the plaque that is present), plaque aciduricity (how well plaque can survive in acidic conditions), oral hygiene (how often the microbial load is reduced by brushing or prophylaxis), and if fluoride is present in plaque.

The likelihood of caries development is higher when the microbial load is high, as indicated by excessive plaque, when more caries-linked bacteria are present in plaque, when plaque produces more acid, when more plaque bacteria can survive in acidic conditions, and/or when plaque is not regularly removed by brushing. The odds that caries will develop are lower when the microbial load is low as indicated by little plaque, present plaque has fewer bacteria associated with caries or that can withstand highly acidic conditions, plaque acid production is low, and/or plaque is regularly removed by brushing or flossing.

While the shift in microflora can occur over a fairly short period, a significant amount of time is needed for demineralization to lead to the development of white-spot and/or carious lesions. Acid production does not instantly trigger tooth decay, and in the early stages, remineralization can restore enamel, keeping the effects of dental caries at bay.

In summary, bacterial fermentation of consumed sugars produces acid in the tooth’s immediate environment. This acid demineralizes tooth enamel and, over time, this dissolution of tooth structure leads to the development of carious lesions. Because the combination of factors and sub-factors include unavoidable situations, dental caries can be very difficult to prevent.

Cavities in teeth often do not hurt until they become must bigger/ deeper and get close to the nerve in the tooth. Often when cavities are cleaned out (removing decay and bacteria) and place a dental filling patients can experience some sensitivity. This is associated with inflammatory processes of healing of the tooth. It’s a bit like the nerve inside the tooth gets bruised during the repair of the tooth, which is entirely normal. The deeper the original cavity the higher the probability of developing this post-operative sensitivity with any dental filling. In short, “toothache after fillings” or even a “throbbing tooth pain after fillings” are both common.

Many times the gum around the tooth can be a little tender, particularly when caries has gone down between the teeth. To recontour the tooth correctly, thin strips or bands are placed around the tooth, near the gum, during the filling procedure. This can cause gum irritation and can feel like an ulcer for a week or so.

As long as the discomfort is brief and the severity lessens over the days and weeks the tooth should return to normal without any further concerns. Throbbing tooth pain after fillings is usually normal. We understand it is uncomfortable, you body just needs time to heal.

Find out more about our treatments

Just call us on