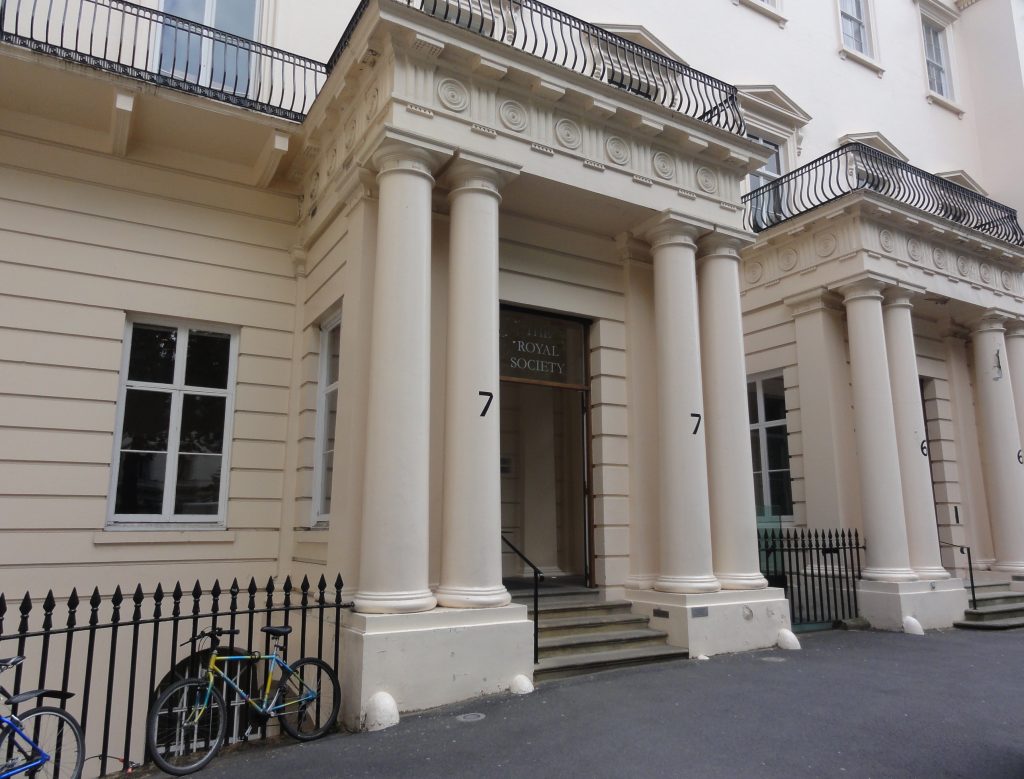 “The Royal Society is a fellowship of many of the world’s most eminent scientists and is the oldest scientific academy in continuous existence”. – royalsocitety.org

The Royal Society was founded by Robert Boyle, John Wilkins and Christopher Wren in 1660.

Before it was established as the Royal Society, their first meeting was after a lecture at Gresham College given by Christopher Wren, and was joined by leading polymaths, Robert Boyle and John Wilkins. The group soon received a royal charter by King Charles II and was then known as ‘The Royal Society for Improving Natural Knowledge’ in 1663.

During the 1600’s, truth was based on the authority of institutions or individuals such as the Church, the Royal Society came up with a motto opposing this. Their motto ‘Nullius in verba’  which is Latin for ‘Take nobody’s word for it’ expresses their determination to encourage individuals to verify all statements by an appeal to facts determined by experiment.

The Society’s fundamental purpose, “reflected in its founding Charters of the 1660s, to recognise, promote, and support excellence in science and to encourage the development and use of science for the benefit of humanity”. – royalsocitety.org

What does it mean to be a Fellow of the Royal Society?

Fellowship of the Royal Society (FRS, ForMemRS and HonFRS) is an award granted to individuals that the Royal Society of London judges to have made a ‘substantial contribution to the improvement of natural knowledge, including mathematics, engineering science and medical science’.

The Fellowship is the oldest scientific academy in continuous existence and is a significant honour which has been awarded to eminent scientists in history. .

The early years of The Royal Society, saw revolutionary advancements in science with leading scientists and their discoveries being found amongst the elected fellows. The Royal Society has supported and published various scientific findings which have changed perceptions on science and human life indefinitely.

Another notable alumni Charles Darwin, best known for his groundbreaking contributions to the science of evolution was a member of the Royal Society. Darwin published his theory of evolution (which was earlier rejected) in 1859 with compelling evidence in his book ‘On the Origin of Species’; he remains as one of the most influential figures in human history.

Due to Darwin’s renowned findings, he received the Copley Medal from the Royal Society – the oldest and most prestigious award, which is only awarded for outstanding achievements in research in science.

In 1921, Albert Einstein was elected Foreign Member of the Royal Society as well as receiving the Copley Medal in 1925 for his work on the theory of Relativity and for his contributions to the Quantum Theory.

In more recent times, Stephen Hawking one of the words most renowned theoretical physicists was elected to be a fellow of the Royal Society in 1974. Since the mid 1960’s Hawking used new mathematical methods to establish the Universe as a singularity at the start of the Big Bang and presented laws that govern black holes. While disseminating his research he became a best-selling author. Hawking was awarded the prestigious Copley Medal in 2006 for his outstanding contribution to theoretical physics and theoretical cosmology. The Copley medal awarded was the first medal flown to space – courtesy of NASA’s space shuttle. As well as the Copley Medal, Hawking was awarded The Hughes Medal which is awarded by the Royal Society in recognition of an original discovery in the physical sciences.

2018 saw the election of Elon Musk as a fellow in the Royal Society. Musk “an internationally renowned engineer, inventor, entrepreneur and is an inspiration to scientists, innovators and thinkers worldwide” is pursuing the long term goal of making humans multi-planet species as well as developing ultra-high bandwidth brain-machine interfaces to connect the human brain to computers through his company ’Neruallink’.

Find out more about our treatments

Just call us on